Paradise Falls is located at a relative small parcel on a sim were there is a magical forest that is on a water parcel, at edge of the parcel behind the landing zone there is a very nice gazebo that is surrounded by trees and of course water. It is amazing that on a 20k sq m parcel anyone can build such a beautiful place, therefore I did not take a lot of pictures. I would more than anything like people to go and explore Paradise Falls and see for themself how amazing this place is.

It is very nicely decorated to give everyone that visit an amazing experience either taking professional photos or for the amateur, Maryf Keng is the woman who have spent her time decorate the parcel she have put a lot of effort into making this a good place for photography. The landscaping have been done by Busta , for more about him check out his profile.

There is a huge garden in the middle of the parcel where there is furnitures of high style and quality that blend into the environment. I would think this place would be great for those who are bloggers, but also for anyone else who just like to take a picture.

I look forward to see pictures taken at Paradise Falls and I hope you enjoy visit as much as I did. (The pictures I have taken was taken with ultra settings, WL at night and they have been in photoshop to enhance the colors.)

I was introduced to Altitude a while back by someone who I knew well and even if their old club back then was a warehouse I instant liked it, I would say it was the people who was around that made the place so special.  And this summer I met Boots when I was at Indie Teepee and she gave me the landmark to their new location, I did not visit until today and with the sim to myself I was able to explore and take wonderful photos using the default wind light.

It has changed a lot from the warehouse I remember a few years back, now it has rusted buildings, towers, rusted airplanes. The new Altitude is located on an island with sea around on all sides, and a lot of recreation area for anyone who visit to sit and reflect. It is also perfect for those who love to take pictures as it has many different scenes to choose from. This place stands out from many other places I have visited over time, it has something for just about everyone to offer.

The music here is Indie style with voice and live performances with many talented people I have listened to, this is absolutely a place to visit if you like to meet unique and down to earth people who also like to listen to great musicians. For more information regarding this place you can visit Altitude’s blog

I took a few pictures for you all to see how nice this place is.

Altitude an Indie music hangout, entrance to the club

Altitude an Indie music hangout, an airplane body and wing on a hilltopp

Altitude an Indie music hangout, outside the club

Altitude an Indie music hangout, reflection in the water from structures

Altitude an Indie music hangout, inside the club

Altitude an Indie music hangout, reflection of sky and plants in water

Altitude an Indie music hangout, overview photo of the club

Altitude an Indie music hangout, a small house in the hillside

I should have done this a long time ago but to be honest I have not been tempted, I am very impressed by their new beach theme club environment as it is very appealing to the visitor. This club has been on the grid for many years, a lot of big name dj’s have been a resident here or a guest dj. If you like electronic music this place might be a place for you to visit, or if you like the scenery and would like to take pictures.

Here you have a few beach houses for small stores surrounded by palm trees and water, waves coming in from the corners of the parcel. As you can see on the overview photo the layout of the club have been changed to the best, you have a waterfall in the back of the land and if you set the right windlight then you are in for a treat.

To take these pictures I have used the Firestorm viewer,  Windlight sky > [TOR] SUNSET – Bangko 1 and ultra settings with all set to 100%. Edit in camera raw Photoshop for final touches and watermark process.

It was earlier this evening that Terry Fotherington creator and owner of the village and bardeco announced that he would close the venue for now, and after the summer he would go for a smaller project that is less in size. As of now it is around half sim where the club (bardeco) and the village that is a series of small houses, buildings, cars, thousands of objects that make it look like a small village.

I understand that we can’t hold on to these places forever and yes it does cost a lot to maintain, then I am talking about all those dollars that’s paid to sim owners for land rentals. I know before he decide to close down he rented some houses out, and I am not sure how many that rented here.

Have been here a lot of times most to listen to dj’s and other times to take pictures of hangout with a friend. Terry has a talent for decorating and he have made this little city come alive, you get the feeling that you are in this little city near the coast, you have houses close to the water.  If you never had the chance to check out this place you have 5 days until the build disappears, hop in your favorite shoes and go to The Village & BarDeco and look around. You could make some good memories in this great little city. 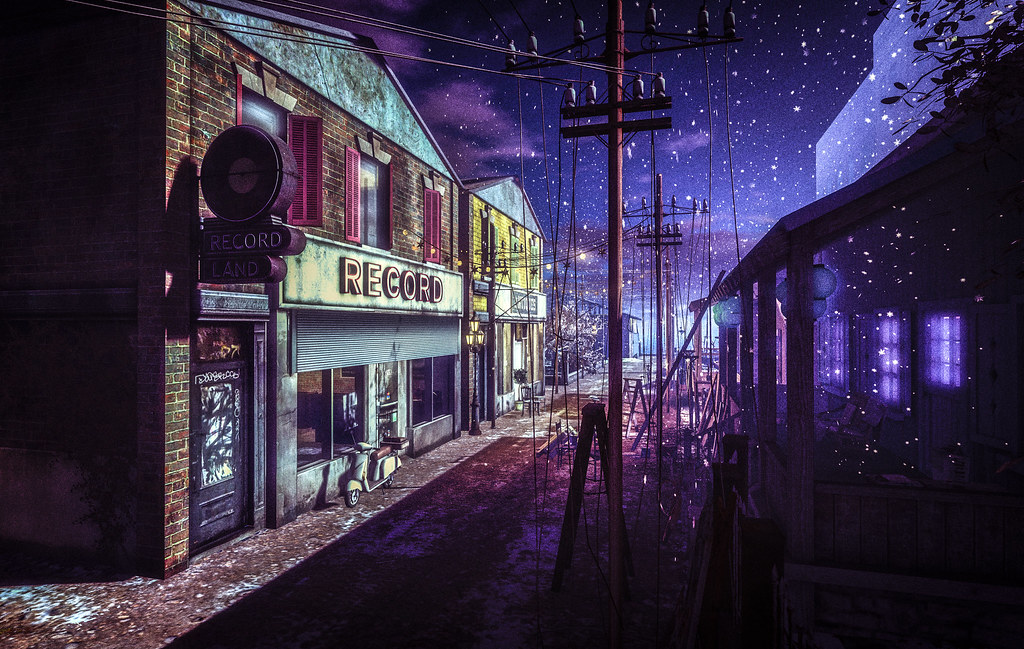 A photo I made in early December in 2016, it is one of the best memory I have from this place seeing a city in the winter.  Playing with light and Photoshop I was able to get this result, bigger version on flickr. (click image to visit.)

After a tip from a friend I was told about this new establishment that have open up on the SL grid, it is created by Isabella Inf1nity and is a place for Art, Fashion, Music events , Shops, Gacha and Chill. The layout of the sim is very nicely build up it has taken a lot of planning and effort by the owner of this establishment to create this place, it is a beach layout with stand alone small shops, the art gallery you see next to the small cafe the second you land.

You can come here and take photos, create videos or hangout with friends or meet new people, the sim is rated adult but certain rules apply those you can read when you arrive as it is not a sex sim. Audience they look for is adult people who like what they offer or if you want to explore you will have a lot to check out here.

They also have areas in air that can be reached with teleports that are on ground, keep in mind it is still work in progress as they iron out the last tweaks for the place. But you are more than welcome to come check it out, I am sure you would like it here if you like the electronic type of music.

Have taken a few photos for you to look at or you can visit Soak Music Avenue and see for yourself.

Went to Smash sim to look around and see if there was some thing going on there tonight, when I used my old teleport I ended up in air at a new setup they made with an air balloon and a floating rock where the club is. Steam punk themed and with the right light settings you can see the northern light as it fly over the horizon, also the light from the light bulbs that surrounds the dance floor.

Took a few photos so you all can see how it looks with the settings set at high + everything on max, photos have been edited in Photoshop / raw filter so it might not look same as a SL photo but still its pretty amazing.  If you feel like meet people who are nice and not complicated at all then maybe this place is for you, or you just want to listen to music and chill out. For more info you can visit Smash on web or teleport to their club.

A small video showing the music area on the beach of Elysion an adult sim in Second Life,  a great place to meet new friends, take pictures or come to one of their events.

Elysion have been created by  Syn Beresford she put a lot of energy to make this great place, running events that are both themed and casual. One of their most famous event are those with Dj Desterac Laval he can spin the panties of most avatars (ha-ha..a fun joke), to be serious he is more a legend around here with his up to 4 hour sets of groovy and sensual music.

A short one to show how it can look when you walk around with sky set to-night, you see all the light bubbles lit in the dark. To visit Elysion you can click here , to experience this place a membership fee (650$L) have to be paid to gain access to the events and general use of the sim.

Hugh With A View

Adventures in collecting "modern jazz": the classical music of America from the Fifties and Sixties, on original vinyl, on a budget, from England. And writing about it, since 2011.

Explore Through My Eyes Of A Beautiful World ♥

fashion and other stuff from my second life

VFXS is the leading industry publication dedicated to art of VFX

A photo album of a virtual life

My oasis in the desert of the living.

Understanding someone’s way with words isn’t as simple as you think.

A Magical Girl Blog - I'm taking my magic and running with it!

reframing the world one picture at a time